Citizens of London, cyclists, urbanists, and climate activists, look no further to find some of the best books about bike culture, city building, climate action, and more! These are books with facts and stories about the things you love — get to know our library and you’ll get to know us! 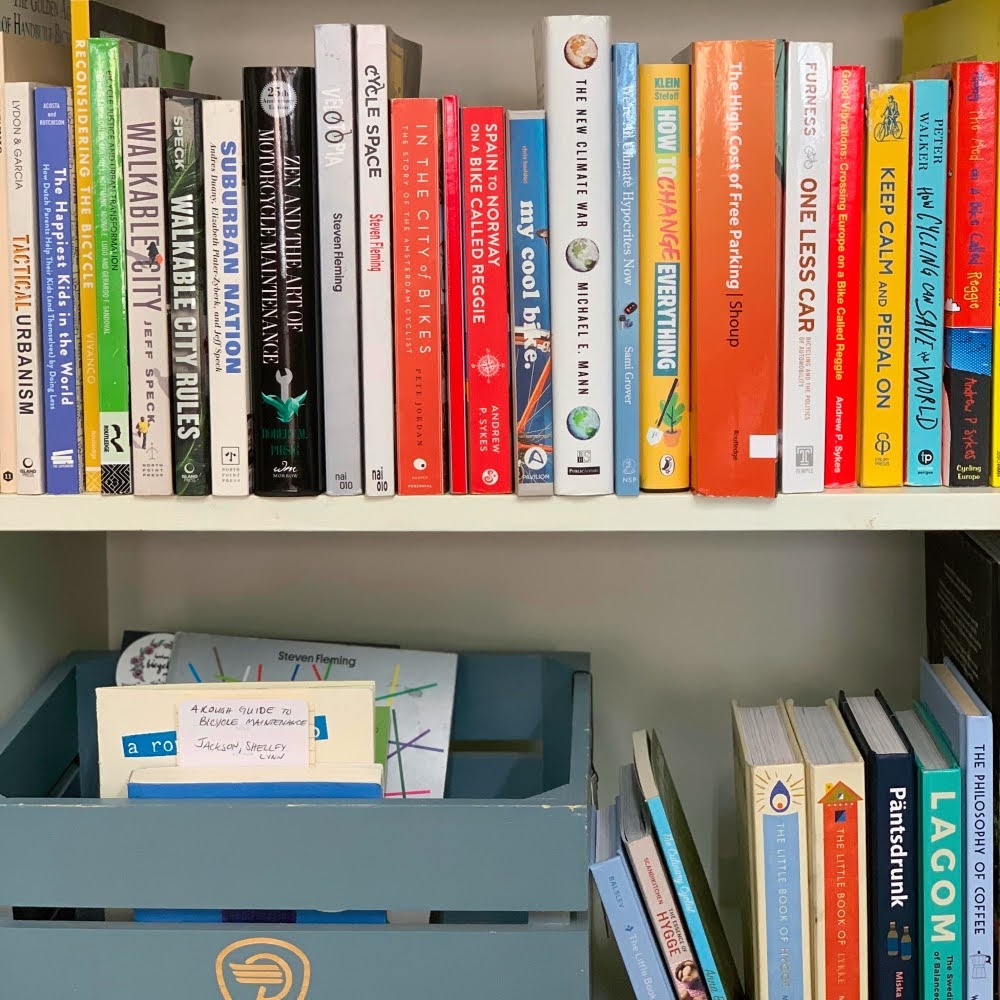 First, you’ll need an LBC Library Card: $5 non refundable one time fee helps us keep a small reserve to grow our library (or replace missing/damaged books! — stuff happens). This gives you access to borrow one book at a time. We don’t do late fees, but we’ll send a reminder if your book is overdue.

Second, come visit us, select the book from the library and pick up your book from the store (355 Clarence Street)! We’ll stamp a two week return date on the envelope (old school style).

Browse titles here before coming in and let us know what titles you think we’re missing.

Along the Med on a bike called Reggie (Sykes)

Bicycle Justice and Urban Transformation: Biking for all? (multiple authors)

Curbing Traffic: The human case for fewer cars in our lives (Bruntlett)

Cycle Space: architecture and urban design in the age of the bicycle (Fleming)

Foul Play is Not suspected (Murphy)

How Cycling Can Save the World (Walker)

How to Change Everything (Klein)

In the city of bikes: The story of the Amsterdam cyclist (Jordan)

Keep Calm and Pedal On (a collection of bicycle quotes) (multiple)

My Cool Bike: an inspirational guide to bikes and bike culture (Haddon)

One Less Car; Bicycling and the politics of automobility (Furness)

Pantsdrunk (kalsarikanni): the Finnish path to relaxation (Drinking at home, alone, in your underwear) (Rantanen)

Reconsidering the Bicycle: An anthropological perspective on a new(old) thing (Vivanco)

Roads Were Not Built for Cars (Reid)

Scandikitchen: The essence of Hygge (Aurell)

Spain to Norway on a bike called Reggie (Sykes)

Suburban Nation: The rise of sprawl and the decline of the American dream (Speck and more)

The Culinary Cyclist: A cookbook and compaion for the good life (Brones)

The Enlightened Cyclist: Commuter Angst, Dangerous Drivers, and Other Obstacles on the Path to Two-Wheeled Transcendence (Bike Snob NYC)

The Happiest Kids in the World: How Dutch parents help their kids (and themselves) by doing less (Acosta)

The Little Book of Fika; the uplifting daily ritual of the swedish coffee break (Balslev)

The Little Book of Hygge: The Danish way to live well (Wiking)

The Little Book of Lykke: The Danish search for the world's happiest people (Wiking)

Velotopia: the production of cyclespace in our minds and our cities (Fleming)

Walkable City: How downtown can save America, one step at a time (Speck)

Zen and the Art of Motorcycle Maintenance (Pirsig)