A brief introduction to cycletracks.

One word you'll hear repeated again, and again on this blog is the word "cycletrack." Our definition of a cycletrack is below:

Cycletrack: a physically separated and signaled lane for bicycles on public streets designed to protect vulnerable people on bicycles from dangerous motor vehicle traffic. The physical separation of a cycletrack must be concrete, rock, or another similar solid substance. 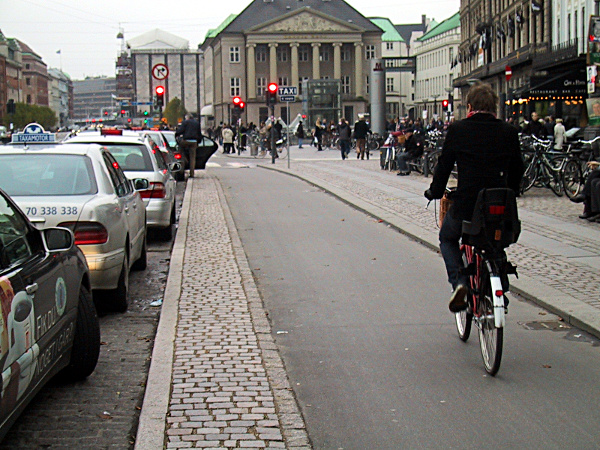 A cycletrack in Copenhagen, Denmark. Notice how everything else on the street is made with cobblestone except the smooth path for bikes? Photo credit: peopleforbikes.org

Leading urban designers around the world have agreed that cycletracks are essential on modern streets, and the old idea that bikes and cars can "share the road" must be discarded. Cities that have adopted cycletracks have seen tremendous growth in ordinary people riding bicycles to get around for daily errands, to get to work, and for fun! Greater rates of cycling bring incredible benefits for everyone. These benefits include decreased motor vehicle congestion, better air quality, enormous tax savings, and healthier, happier people because of daily exercise. We'll write more about these benefits in later posts, because the cycling benefits to individuals and society are worthy of more in-depth discussion. Once cycletracks are installed, rush hour changes entirely, too. Check out Copenhagen:

If London wants to become a bike city, cycletracks must be front and centre in the discussion about bike infrastructure. In fact, we believe that nothing else matters more. If the city builds a safe space for ordinary people to ride their bikes on the road, they will rediscover the joy of cycling. Riding a bike is a fun, fast, and safe way to get around the city, and it won't take long to realize how great riding a bike every day can be.

I'll share a quick story about a ride I helped lead last fall in Calgary, AB. As part of a local science and arts festival called "Beakerhead." A group of ordinary people led a group ride of more than two hundred people, mostly families and children, between different art installations that had been set up around the downtown core area. Before Calgary installed cycletracks downtown in 2015, riding your bicycle downtown was scary, and such a ride would have been unthinkable with an eight year old. Streets are wide, traffic moved fast, and it was very busy. However, in 2016 we could ride on separated cycletracks with children as young as six, enabling families to engage with their city in an entirely different way. A child named Ella who I met on the ride was so excited to have her own space to ride her bike in the city, she was singing about bikes while riding on 5th Street. When I asked her about it, she and her mom said they felt safe on the cycletracks. It was another key moment when I realized how powerful safe infrastructure built for everyone can be.

Today, I see London as having so much potential for families on bikes, but we need to build cycletracks to make it safe for everyone to get on their bikes and ride.