You mean there's financial reasons to ride your bike? Yes!

I've been waiting for the right time to write about the personal economics of riding a bike for transportation, and a discussion on Twitter this week spurred me to finally do it. If you don't want to read the rest of the post, here's the Coles Notes: riding a bike is probably the best "get rich quick" scheme ever invented, and is guaranteed* to make you a couple hundred thousand dollars before you retire if you start right now.

Let's start with the assumption that you're 35 years old, and commute by car like most people do in London. Your work commute trip is 7 km, and you park for free at your place of work. If you pay for parking, add $50/month ($600/year) onto the end of your calculation.

Start with the cost of driving: $0.54/km per the Federal government's mileage rate. This includes gas, insurance, depreciation, maintenance, et cetera. However, what's not included in the mileage rate are taxes. You have to pay taxes before you spend that $0.54/km on your car, so let's consider income taxes at Canadian average of 42%, and now we're at $0.93/km. Those taxes pay for roads, emergency response, and your medical bills in case of a crash, so they're pretty reasonable to include here. The $0.93/km I calculated is pretty close to a recent study that calculated the total cost of driving in slightly less-taxed Alberta ($0.83/km), so it's a reasonable value to start with.

Next, let's consider your commute. You drive seven kilometres to work and back, five days per week.

Compare this to the average cost of buying and maintaining a quality bicycle at $500 per year, and you're saving more than $2500 per year on your commute alone. If you run errands, bike to a festival, or a movie, you can bank that money, too. Bottom line: for every kilometer that your bike replaces a car trip, you could have an extra dollar in your bank account.

But wait, there's more! Are there health benefits to riding your bike to work? You bet. Recent research showed that commuting on your bike is as good or better than buying a gym membership. Let's count that as an additional $500 per year savings from canceling your gym membership. Now you're above $3000 per year in savings for switching from a short car commute to a bicycle. As a bonus, you're healthier. Way healthier. People who bike to work have lower rates of heart disease, cancer, and many other ailments, and an overall 41% less chance of death than people who commute by car.

Now here's the "get rich quick" part: investment. If you invested that $3000 per year in an index fund at traditional market rate of return, you would have a comfortable retirement nest egg of more than $200,000 on your 60th birthday. During that time you'll have cycled more than 85,000 km, so a km cycled is more like two dollars earned. Don't believe me? Try the math here. Future you is fit, happy, healthy, and considerably wealthier by any standard. Enjoy your golden years, you've earned them.

Oh, what about time you ask? Surely car travel must be faster than biking, which is why everyone car commutes, right? Right? Untrue. Bikes are the fastest mode of transportation in cities up to about five kilometre trip length. The graph below shows real speed comparisons in city settings. At city speeds, a seven kilometre commute is roughly two minutes faster by car than bike during normal conditions. But has anyone ever had their bike commute interrupted by a traffic jam? Nope. And remember how you don't have to spend mornings at the gym anymore? Yep. Bikes are consistently the fastest and healthiest way to get around cities everywhere.

So this leaves us with one question**: why aren't you commuting by bike yet? It's the fastest way to get healthy, and strike it rich. We guarantee* it. 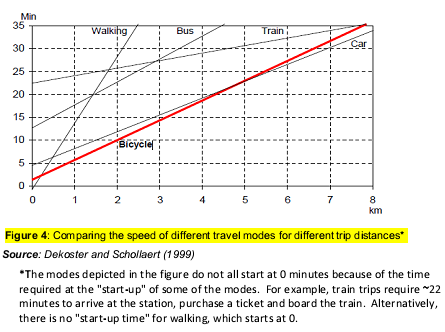 * guarantee in this context means "we 100% absolutely and certainly believe our own math on this one: getting on a bike means saving tons of cash." We also make an assumption that you're dumping your cash into an RRSP or TFSA for our calculations. If you've already maxed these out, congrats, you're in the 7% and don't need our advice.

**Subquestion for planners and politicians: why aren't you designing streets to encourage your citizens to commute by bike yet? More than 60% of people in your city say they want to ride their bikes more (partly to get rich quick), but are afraid (rightly so) of riding in traffic with dangerous cars. Building a minimum grid of separated cycletracks is the best way to get started. What are you waiting for?