Guest Post: travel along the delights of a fall ride in London, Ontario.

This fall has given us a bountiful gift of an extended bike season, with no signs of slowing up. Bernie McCall asked us if we could share her experience riding the Thames Valley Parkway, and we couldn't refuse. Here's her story:

A Fall Cornucopia
by: Bernie McCall

It was such a beautiful fall day that I couldn’t resist getting on my bike and hitting the Thames Valley Parkway (TVP) which is a 10 minute ride from my home in southwest London. It has been about five weeks since I last cycled, having been on vacation, so I am not sure how far I will go. All I know is, I want to get out and enjoy such a perfect September day. Once on the TVP, I free wheel along the Thames River, joining other cyclists, walkers, joggers, rollerbladers, people wheelchairing, friends, couples, families, all ages out enjoying the day. I pass through Greenway Park and note picnickers and people fishing off the wooden landing by the river. I continue along, enjoying the sunshine and pass through the Greg Curnoe tunnel under the railroad tracks which leads me out onto a street behind the Children’s Museum. I pick up speed as the trail descends under the Wharncliffe Road bridge, past some community gardens and the HMCS Prevost building. I hear some music and decide to check out the Beatles Festival that is happening on Dundas St. I catch a rendition of ‘Let It Be’ and ‘Oh! Darling’ … Nicely done!

Time to get back on track. I take Dundas Street to the turn off at Museum London by Harris Park, dodge a few geese crossing the path, then up the hill to where the trail meets Blackfriars Bridge. Down another hill and under the Oxford Street bridge where I see that the tennis and beach volleyball courts are being well used. The trail makes another descent into Gibbons Park where I make sure to pay close attention to people strolling and walking along the trail, especially children who may dart out unexpectedly. I ring my bell courteously a couple of times just to be sure people know I am coming. There are lots of people picnicking, sitting on the benches along the river, talking or just reading. There even a few people with hip waders fishing! I’m not in a hurry, just enjoying the moment. The air is cool and the sun is warm: my favorite combination! 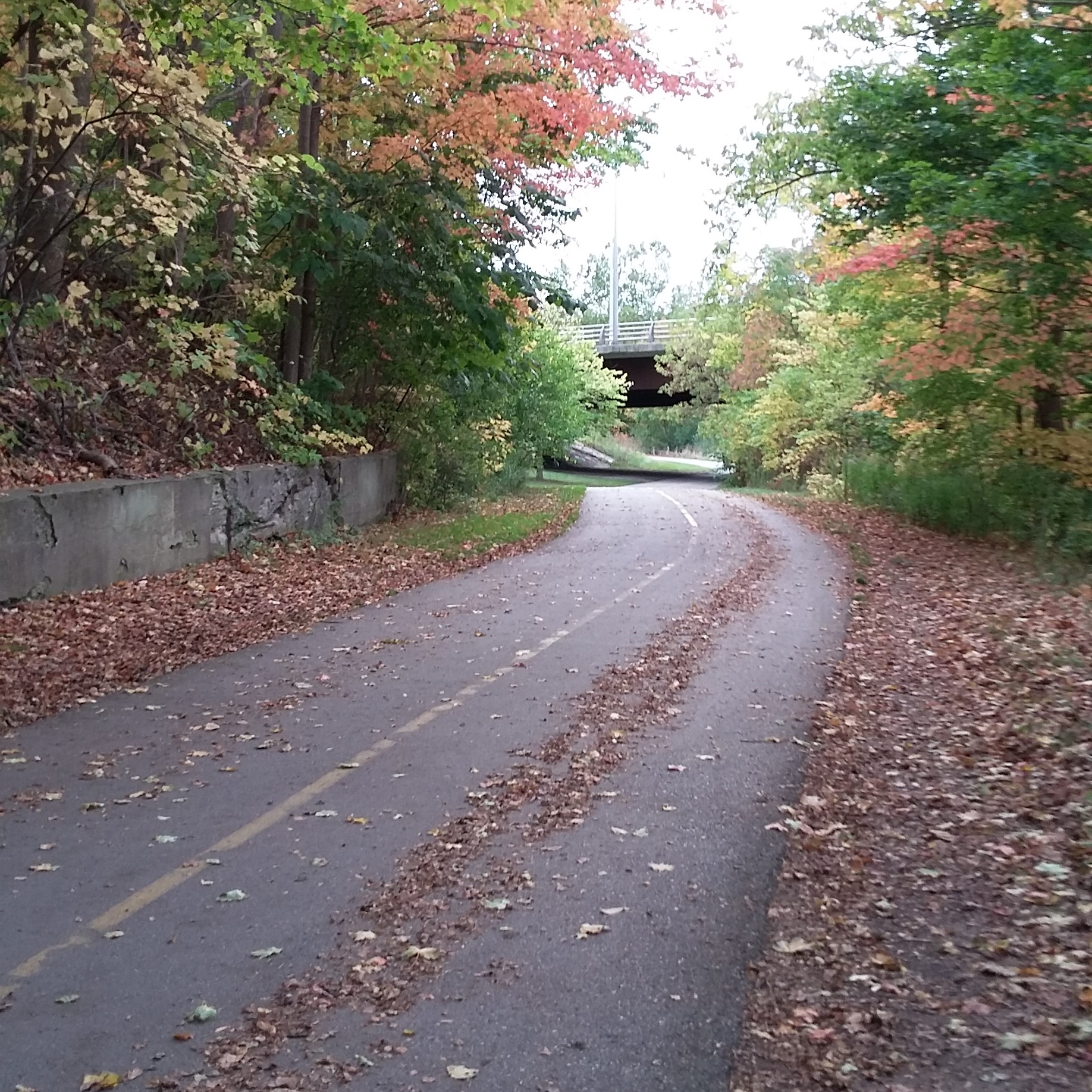 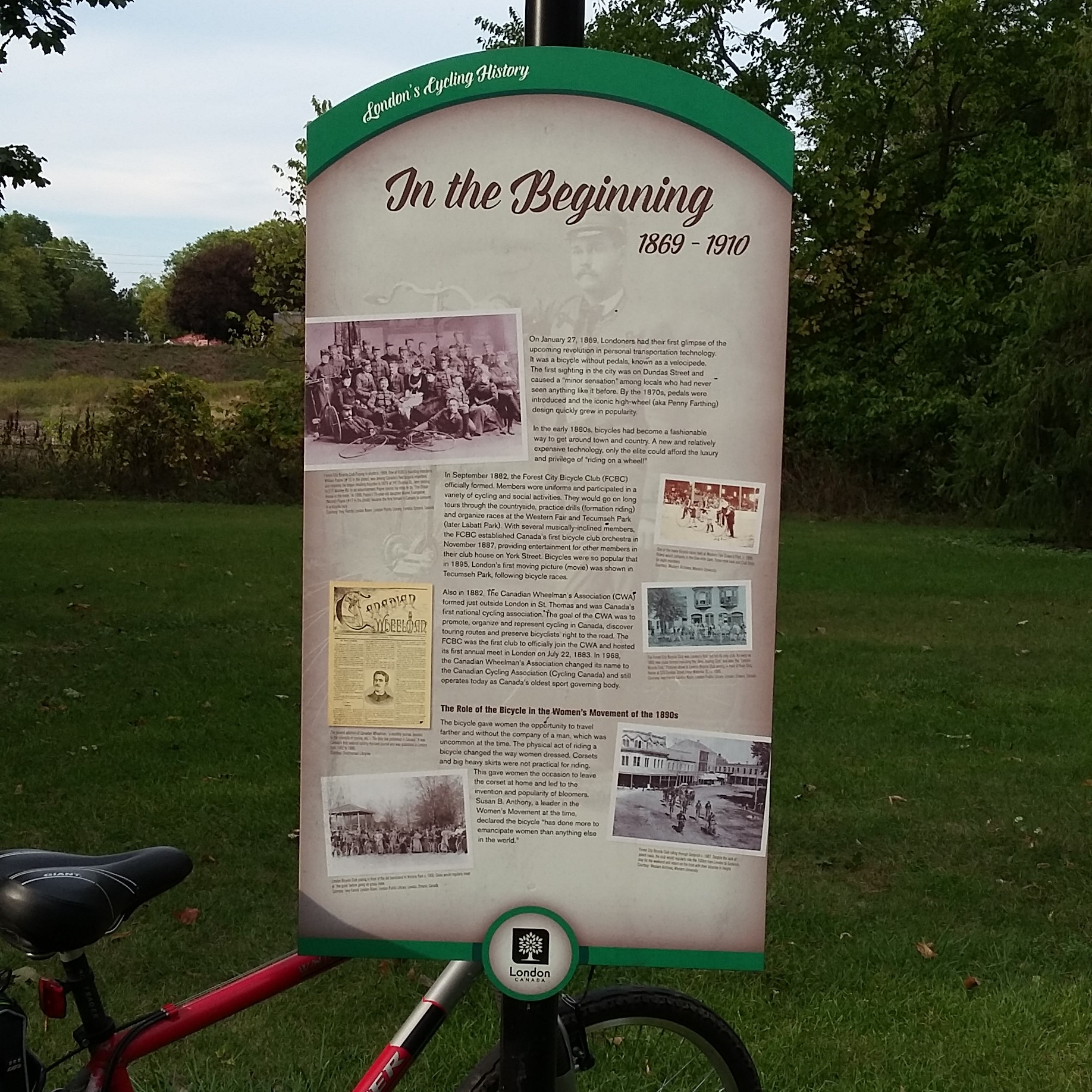 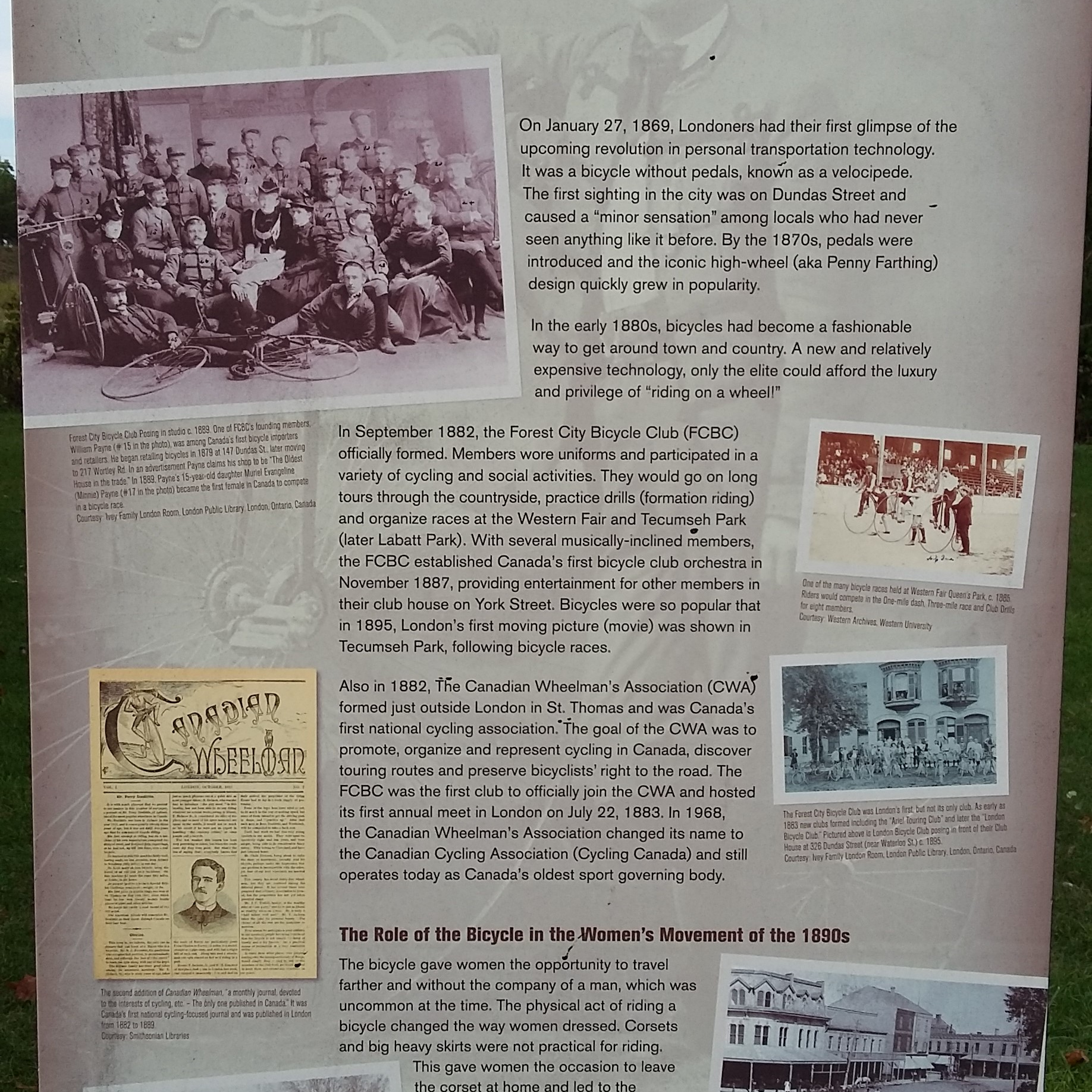 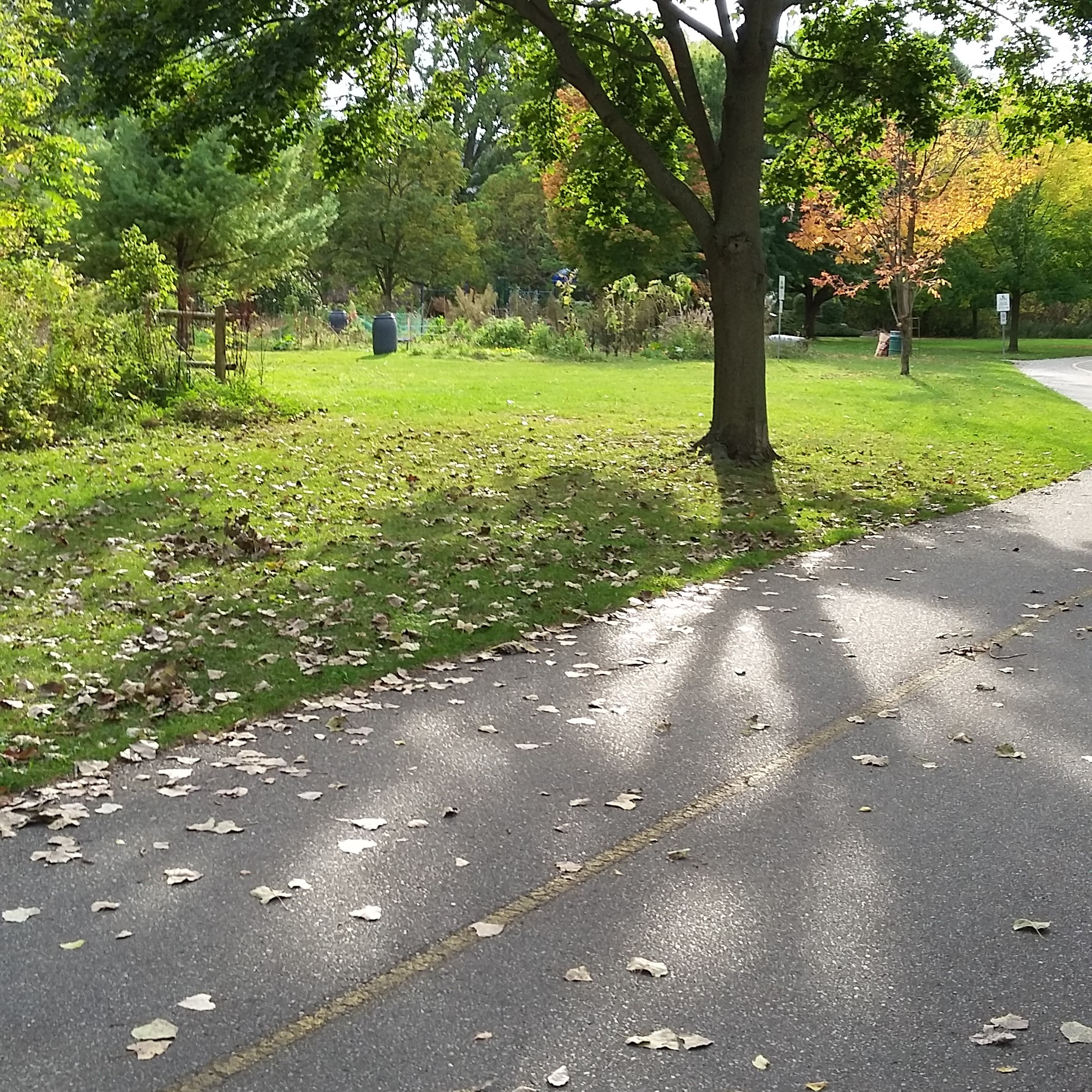 Heading north, I glide along the river flats and admire the goldenrods that are flowering on either side. How wild and untethered they look swaying in the light breeze, kind of like how I’m feeling right now! After a short jog along a street, I cut back onto the trail by the University Bridge & drop down under it to traverse this lovely wooded section along the river. The path twists and winds along its way. The woods are cool and refreshing!

The trail continues under the Richmond Street bridge. It is a blind curve so I slow down and ring my bell as I have had a few close calls here in the past and like to send out a warning before I take the turn. All clear! I take the trail to where it ends at Raymond Avenue, work my way through a few Old North streets then feeling spontaneous, I decide to drop in on a friend who lives in the neighbourhood. I’m in luck, she’s home, and we have a brief but great chat on her front porch and promise to connect later in the fall. Then I am off again to resume my journey, feeling good that my friend was home.

A few more streets and I am at the Huron Street TVP entrance. This is one of my favorite sections. The giant yellow daisies and goldenrods greet me as I glide by. I catch a glimpse of the small swamp along the path where you sometimes see dragonflies or small wildlife. Nothing today, and fortunately I’m moving too fast for any mosquitoes to catch me! The path continues to twist and wind in delightful ways which are exhilarating. I pass all kinds of people, mothers and fathers walking their children or pushing them in strollers, people walking their dogs, walking with mobility aids, and even riding electric wheelchairs. All look happy and content to just be out enjoying Mother Nature. The TVP is truly a trail for everyone and has numerous access points which helps make it a very special treasure in the midst of the city!

I breathe deep as I take in the scents of the surrounding vegetation and even observe a few trees with sprinkles of fall leaf colour starting to happen. I hear the blue jays calling, a sure sign of fall. The sky is clear blue as I continue past the North London Athletic Fields. Next, I duck under the Adelaide Street Bridge and continue along the trail which runs tantalizingly close to the river in this section. The water level is low and a few people have stopped to sit along its edge, a father and son sitting on a bench and couple of cyclists who have parked their bikes at the trail’s edge. I skim over a couple of small bridges, pass an open area and enter a thick forested section where the air is cool and moist. I’m getting closer to my turnaround point at Highbury Avenue and my quads are letting me know that it’s time to head back home. No worries, I’ll just slow the pace a bit and continue to enjoy the afternoon!

The forested section just before Highbury, is deliciously vibrant with crickets, cicadas & birds which, all combined, make an almost deafening sound! What are they up to on this beautiful fall day I wonder? I reach my turnaround point, take a drink of water then begin my homeward trek. I keep the pace steady and reasonable. My quads are fatiguing and I wonder if I’ll have to walk up the last ‘killer hill’ before I reach home.

On the way back everything is in reverse, not boring at all. I recognize people that I met when going in the opposite direction. Even though we don’t know each other, we nod, acknowledging each others’ presence, knowing that we are experiencing a kindred moment simply by sharing the pathway at this point in time. That feels good.

I pass by Ross Park where a few university students are playing a pick-up game of football. The air seems to be warmer now or maybe it’s just me, that’s warmed up after cycling for over an hour. There are less people on the pathway and in the parks. Up the hill to the Blackfriars Bridge,I made it! Now my reward,to coast down the hill into Harris Park. I pass by Ivey Park at the forks where a number of people are playing frisbee. I go over the wooden King Street Bridge and swoop down the trail. My eye catches the Walter J Blackburn Memorial Fountain spray arched over the Thames River, it looks awesome!

I decide to stop and read the historical sign titled, “In the beginning … ,” just west of the Forks, where I note the quote by Susan Anthony, a leader in the Women’s Movement. She states that, the bicycle “has done more to emancipate women than anything else in the world.” The bicycle gave women the opportunity to travel farther, and without the company of a man, which was uncommon at the time. Hmmm … what an interesting connection to make with cycling. I like that thought!

On I go, up the hill behind the Children’s Museum and on to Greenway Park where I pass a group playing Boca Ball. Looks like fun! Up the hill to get onto the Wonderland Road bike path. I’m in the home stretch now. Just two more big hills to climb. I determine that my quads CAN do it! Slow and steady. Deep breaths. Don’t stop. Made it! I skim through my neighbourhood park and up one more little hill. Home at last, 40 km later. What an awesome bike ride on London’s premiere multi-use path, the TVP. And with my head filled with memories of the wonderful sights, sounds, scents of the trip, I realize that I have just experienced a fall cornucopia on the TVP. I know that I enjoyed something special today, and that I will sleep well tonight!