London's downtown bus rapid transit network. Conspicuously absent are ANY green lines, which represent where bikes would travel after this project's construction.

Unless you've been hiding under a rock in London, Ontario, you know that the city is about to undergo its biggest transformation in how it thinks about transportation since the inception of the LTC. Some detailed plans were released this past week, and we wanted to know how they would impact life for people on bikes. Turns out, it's not good.

The construction of Bus Rapid Transit lines in London has implications for the city's bike network, particularly downtown. The plans released this week that indicate a lack of consultation, expertise, or both, with respect to the accommodation of bikes. There are a lot of challenges with bike implementation city-wide within the Shift plan (and certainly more generally), but today I'm going to focus on downtown. Put simply, the BRT plan eliminates or decreases access to downtown by bike, and that's not OK in a modern city. Furthermore, there is no plan to create an all-ages-and-abilities route into downtown to replace what is being lost. 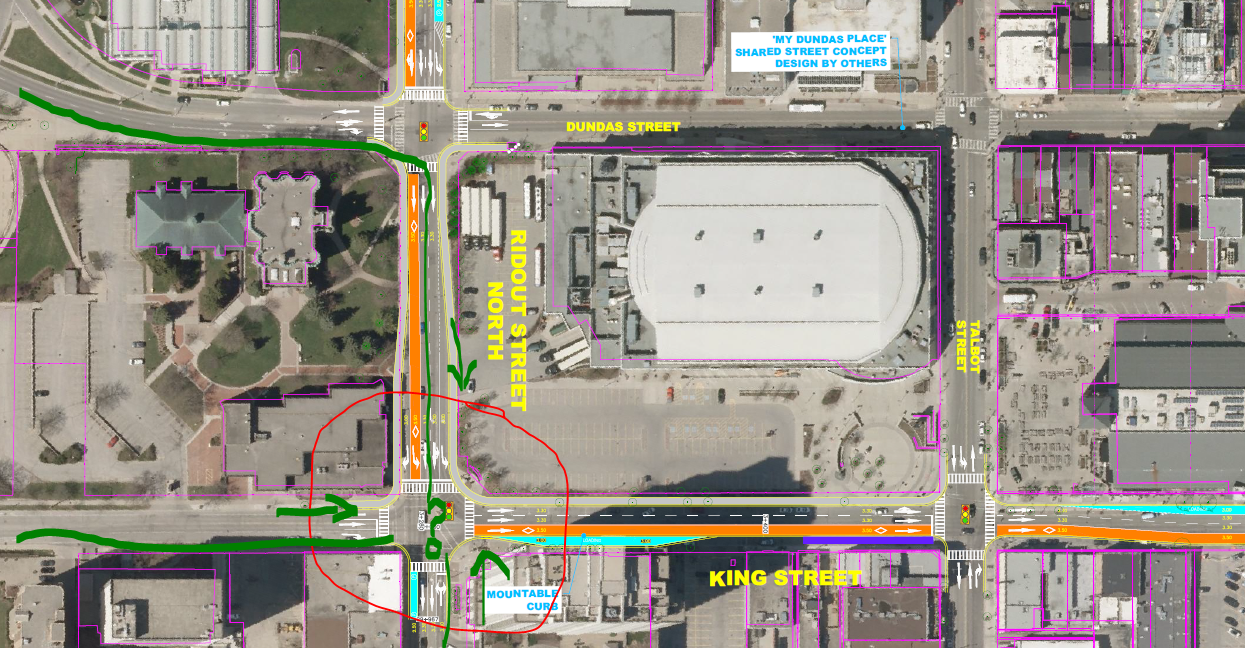 All existing major bike routes leading into downtown converge at King and Ridout St. After Shift, there is nowhere to go. The bike lane that formerly traveled eastbound on King has been removed. Mapped image clipped from Feb 28 Shift BRT posters.

Let's start with getting into downtown by bike. From the South or West (or maybe even the Northwest if you were traveling on the TVP), a person on a bike can take one of three routes: 1) Riverside Drive, 2) TVP - King Street, or 3) Ridout Street. Within the new Shift plan, bikes traveling east into downtown from Riverside would need to turn right on Ridout, and take the middle lane south to continue. This means bike-person is traveling with buses on their right, cars behind them, and cars on their left (see the uppermost green line traced on the image above). Once they reach King and Ridout, they meet up with riders from the west (King Street, where people access downtown from the Thames Valley Parkway) and Ridout Street bike lane carrying riders from the south. To continue into downtown, all three riders must go east on King, taking the travel lane between the buses and cars. This isn't a solution that works for anybody. It's uncomfortable, dangerous, and won't be appreciated by people in cars, on transit, or on bikes. Having a shared bus-bike lane here doesn't work because shared bus-bike lanes never work. It's not comfortable for me to be in front of a bus, let alone the consideration of how an eighty year old getting produce from the Market might feel. Nor is it equitable that I could ride slowly in the bus lane, delaying fifty or more people on the "Rapid" transit route. The best (and only realistic) solution here is a curb-protected bike lane on King, leaving one lane for cars, one for bus, and one for bikes, while gaining a few parking spots, and making King Street a more delightful experience for pedestrians (and everybody). As the confluence of all people on bikes from more than half of the city, there must be bike infrastructure on King Street if we want to have a 21st century city designed for people. This solution would allow safe access from most of the city into downtown. 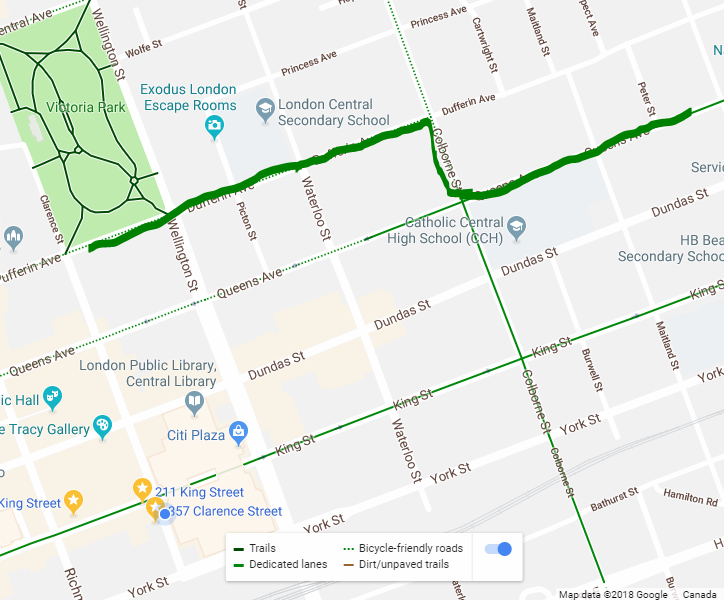 Yes, let's make it less direct for people on bikes than anybody else. I've seen a cartoon about this before...

Let's go to the east side of downtown, where there isn't any incoming bike infrastructure at all. The Queens Ave painted bike lanes end at Colborne Street, east of downtown, and since the BRT picks up on Queens Avenue west of Wellington, it's not a preferred option to enter downtown without considerable design changes (a cycletrack similar to what we suggested for King would be necessary). From what I was told by BRT engineers, Dufferin maybe will get some painted lanes from Colborne into downtown, perhaps allowing access to Victoria Park from the east. If we're lucky it could even be a curb-separated cycletrack. However even this solution requires people on bikes to zig-zag, making two unnecessary turns, while cars are prioritized and will continue to be able to drive straight into downtown. Is this the kind of city planning we deserve in 2018? I'm sure we can do better.

What's more important than picking apart each instance of failure to plan for bikes, is the lack of a cohesive plan to get quality bike infrastructure for Londoners. London's master bike plan is unambitious, and outdated. Despite being published in 2016, it ignores transitional success stories in car-centric Calgary and Edmonton (where an entire cycletrack network went from council discussion to full construction in less than a year, and then cycling numbers doubled in the first month of operations), and doesn't mention Montreal's decades-old success as being one of the world's top urban cycling cities. What each of these cities has in common is on-street infrastructure that separates bikes from cars with curbs. The "London ON Bikes" plan focuses on comparisons with infrastructure-also-rans like Kitchener-Waterloo, Toronto, and Windsor. Not one of the Strategic Action Items for London include "Design and build on-street infrastructure that separates bikes from cars with curbs," which is the only proven way to get more people riding. London ON Bikes promotes an outmoded strategy that won't meet the needs of people who want to get on bikes more often, and as a result, London has zero bike routes that meet the following three important criteria:

The future we envision is one where families can comfortably and safely ride their bikes from anywhere in the city to downtown for festivals, hockey games, shopping, theater, restaurants, and picnics. Also a future in which families who increasingly choose to live downtown can do so without using a vehicle for everyday activities. A network of protected bike infrastructure is not only feasible, and desirable, but necessary in a modern city that competes for talented professionals in a global economy, and one that treats its citizens with dignity no matter what mode of transportation they choose. The current BRT plans are a firm step backwards for people on bikes in Downtown London. We hope these plans change before the system is finally built out.

As an aside, the BRT system was not placed on York Street (which would have connected the BRT to inter-city transit at Via and Greyhound) because "too many cars drive on York." If you make the same argument on King (too many cars drive here, we can't afford this space for people on bikes), you're not really concerned about prioritizing different modes of transportation other than driving.