Shop founder Ben's experience at the National Bike Summit put on by Vélo Canada Bikes in 2018.

Wow. I'm on the train home from Ottawa and still tingling from the excitement that was generated at the National Bike Summit this week, organized by Velo Canada Bikes. The meeting was attending by more than 150 stakeholders including government, industry, and citizen-advocates. It is run primarily by volunteers, and one part-time executive director (all my love to Judi Varga-Toth for her incredibly dynamic work, enthusiastic spirit). It was a meeting of Canada's best cycling minds, supported by leaders from communities across the country.

The purpose of the annual summit is to make a case for direct federal investment in cycling. Bikes are often overlooked in federal policy partly because the use of the bicycle for transport has such a broad impact on a wide range of our society. Perhaps more directly, most transportation issues are considered to be provincial/municipal affairs. However, when we started to examine federal portfolios and the goals of each ministry, it became very clear that bikes can and should fit into virtually every federal office. Could bikes fall under the Ministry of Transportation? Health? Environment and Climate Change? Youth? Minister of Sport and Persons with Disabilities? Industry? Families, Children and Social Development? Status of Women? Infrastructure and Communities? We think yes to "All of the Above" is the right answer. Cycling has the potential to improve so many different aspects of daily life that it's hard to find a ministry where a cycling strategy wouldn't be relevant. We went to Ottawa this past week to make the case to parliamentarians that a National Cycling Strategy is essential to bring the benefits of daily cycling to all Canadians, and we found a lot of leaders who see the same thing we do.

On the first day of the meeting, we were set up in the council chambers of Ottawa City Hall. Mayor Jim Watson welcomed us, and and afterwards speakers from all across Canada shared stories, revealed secrets to success, identified challenges, and gave us all many reminders of the benefits of cycling to individuals and societies. In the evening there was a reception hosted by the All-Party Cycling Caucus where we were treated to a screening of Shift, an award-winning film about the bike-based transformation of Carcross, YK, a northern indigenous community.

I live-tweeted most of the meeting on a single thread you can link to here, or follow below.

I'm on my way to the @Canada_Bikes National Bike Summit in Ottawa! Excited for a multimodal trip with my Brompton, catching up with old friends, and working on making Canada's cities, towns, and rural areas great places to ride a bike! #LdnOntBike #CNBS18 pic.twitter.com/Bxqxt7OmfE

On the second day, we were across the street from Parliament in the Victoria Building, and everyone was looking sharp for our meetings with federal leaders. There was concurrent programming and private meetings with parliamentarians throughout the day. I was part of a group that met with Sonia Sidhu, MP for Brampton South, and a strong supporter of cycling's health benefits. We weren't allowed to take pictures where we met her, but we took a group selfie in the Rotunda afterwards. 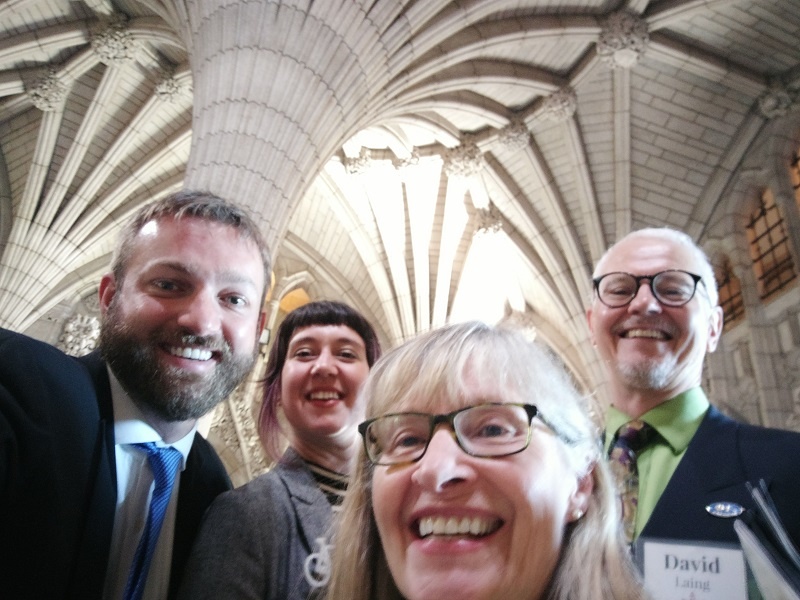 Our team from left to right, myself, Tegan, Dayle, and David.

Tuesday afternoon was jam packed with bike rides. We participated in an infrastructure ride led by Alta Planning, who showed off their spectacular cycletrack design on Main Street (and some other new exciting projects in the works), and finally an inter-provincial ride from Parliament Hill supported by all parties, and led by the Minister of Environment and Climate Change Catherine McKenna. Minister McKenna spoke about the need for cycling to meet our decarbonization goals, while simultaneously enabling a healthier population. I was also fortunate enough to bump into NDP leader Jagmeet Singh (a former Londoner), and we chatted about his bike experience riding from Masonville to White Oaks for his part time job - not an easy feat. Jagmeet's message when he spoke publicly was simple: we need a National Cycling Strategy because it should be safe and comfortable to get on a bike and ride for transportation in every city, town and rural area in our country. Those are messages we can get behind. 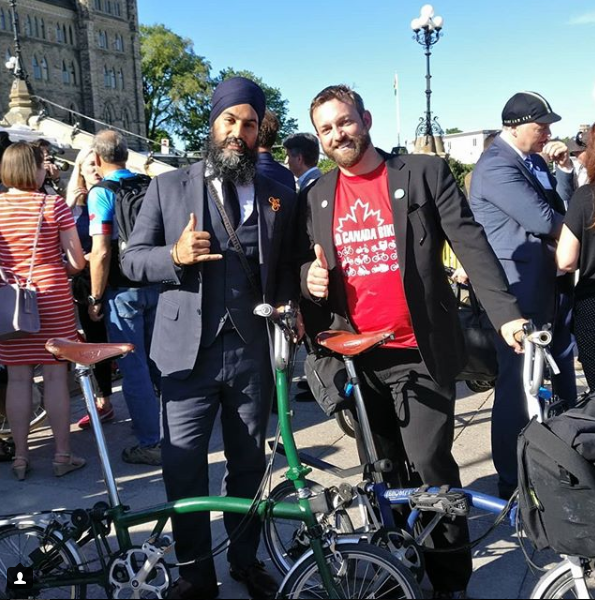 The evening wrapped up with a low-key BBQ in the East Block Courtyard, led by the founder of the all-party cycling caucus John Weston. He was joined by Elizabeth May, and Nancy Greene Raine who spoke about the importance of cycling for improving Canadian fitness, environment, and community. It's easy to see why cycling is supported by leaders of all stripes, when a sometimes divisive party system can find so much common ground over a burger and a beer.

Reflecting on the Summit the train ride home, I can't believe what we accomplished in such a short time. It's amazing what an organized group of committed individuals can make happen. Kudos to the Board of Velo Canada Bikes for making everything so seamless, and making it easy for people like us to contribute in a meaningful way. 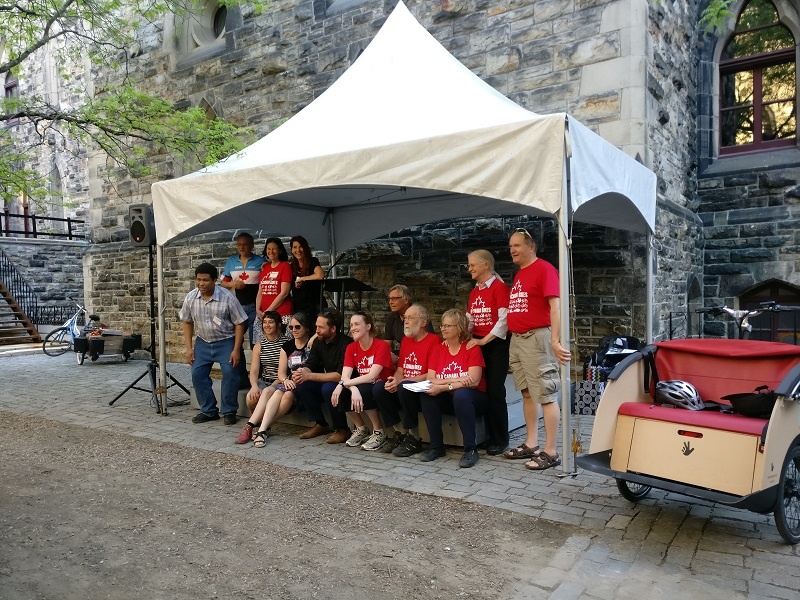 Board of Directors of Velo Canada Bikes

Finally, THANK YOU, to all who contributed financially to this event. I was hesitant to ask for your donations initially, and then was overwhelmed when we raised 100% of my costs in less than 36 hours. You're all so wonderful; thank you for supporting our efforts. I hope we can keep supporting your urban bike adventures for years to come.

If you like what we achieved at the National Bike Summit, please consider joining Velo Canada Bikes as an individual member. In order to continue operating effectively, the organization needs to have a stable financial base, and individuals like you can help the organization continue its work year-round. Velo Canada Bikes is a high-performing team led by people who are passionate about enabling ordinary people to choose a bike for transportation every day. As President Anders Swansson said in his closing address, "I don't do this for me, I do this for the people who would choose to ride a bike if they felt safe and comfortable doing so." Sign up via the link below, and help build a Bike Friendly Canada. Thanks.